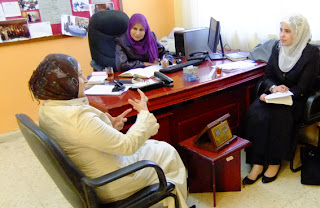 Strategic partnering NGO, the Hashemite Fund for Social Development JOHUD in both locations, organized and co-interviewed the candidates for further insights on the scope of work of these organizations, on-going projects, and future plans to become networked non-profit organizations.

" Despite geographical challenges and limited internet connectivity in our villages, we are determined to make the best out of this program as we want to create better linkages with donors and other organizations working in the same field to achieve objectives set" said Wa'ad from Umm Al Jimal in Mafraq.

" We want to promote traditional Jordanian food because new generations are not familiar with it...we want them to know about Fateet, Burgol, and Kbab and the history and unique traditions behind it" Eman from Nashmiyyat Al Badiya commented with a smile.

" We have a high percentage of Diabetics in Mafraq... they need sponsorship for their medication, however, I want social media not only to help me collect such sponsorships but to also promote awareness of this medical condition and ways and means to prevent it...this is our responsibilities towards our children and generations to come" Mr. Jazi from Diabetes and Cancer Society mentioned.

" We want to create playgrounds, walkways, and healthy public spaces in Mafraq to fight obesity and unhealthy eating habits and we hope the program will help us to promote awareness across targeted groups" Samah from Rahma Society said.

Ms. Balqees Al Shawabkeh from Madaba Troop said that this program will be a great opportunity to help them in announcing for their troop activities such as Educational Drama activities through strategically planning for advertising campaigns, she added that she was waiting for such training program.
" I personally use facebook since a while, but we never were able to use it in a professional way to communicate and build relationships to support the society" Mr. Ali Al Nawafa’ah from Zaid bin Thabet Society said.